Elon Musk’s ‘Twitter 2.0’ really should really be titled ‘Twitter 1.5’, because none of his touted ‘new’ additions thus far are actually new at all, they’re all just variations of past Twitter experiments, which Elon’s then re-pitching as upgrades, as he foists them upon the platform’s users.

Musk’s latest ‘new’ addition is this: 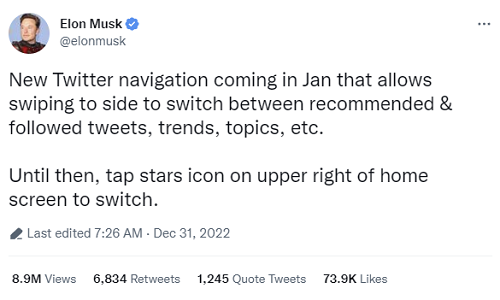 Because people hated the ‘Home’ timeline approach, which kept showing them old tweets, tweets from people that they don’t follow, tweets liked by their connections, etc. As Twitter notes, the feedback was clear – users don’t want alternative timelines, they want the main feed to be the latest tweets.

We heard you –– some of you always want to see latest Tweets first. We’ve switched the timeline back and removed the tabbed experience for now while we explore other options. https://t.co/euVcPr9ij6

Seems that Elon and Co. haven’t uncovered this feedback as they comb through old Twitter docs, so they’re rolling out again, as ‘new Twitter navigation’.

Look, there is some value in making it as easy as possible to switch between the algorithm-defined feed and the timeline of tweets from people that you follow, in chronological order. Over the last month, Twitter has been trying to push a wider range of content into the main feed, in order to expand tweet discovery, which has generally just annoyed people, and because of this, Twitter will be hoping that this recycled side-swipe navigation will negate user frustration, while also enabling it to continue pushing more tweets into people’s feeds.

Because as TikTok has shown, AI-based recommendations, if you can get them right, can drive higher engagement and retention. Twitter’s algorithm is not there yet, but Twitter wants to ensure that users keep that algo feed active, as it seeks to improve its systems, and hopefully, maximize engagement by showing more people more stuff that they’ll like in the app.

As such, you can expect that Twitter will still continue to open to the current feed of followed and recommended content – but a simple side-swipe will take you to the experience that you actually want.

Which isn’t what people want, as they clearly stated when it was first launched. But again, this is the way with Twitter 2.0, a rehashing of old concepts and tests that Elon wasn’t aware of when they were first trialed, so they’re new to him. And he sacked most of the people that could have explained to him why they didn’t work out initially.

But you do have to give Elon and Co. credit for one thing – they are doing things differently. While most other apps are copying each other, Twitter is copying itself.

I mean, the original tests were abandoned for a reason, so it might not be the best strategy. But it sure is different.