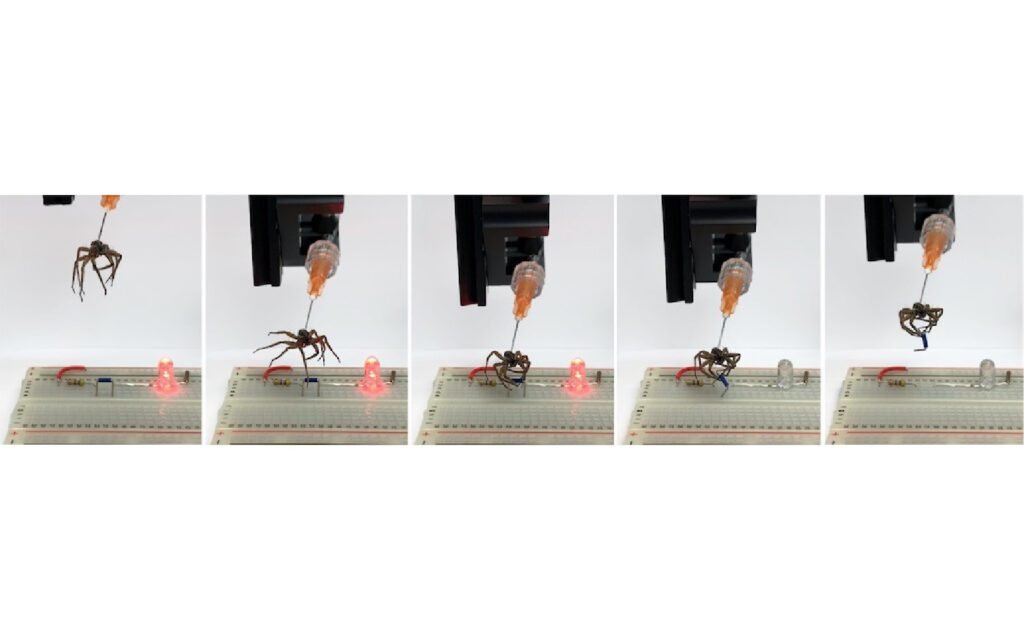 While we’ve seen scientists find novel ways to use insects after they’re dead, it’s hard to imagine any group of researchers topping the work of a team from Rice University that turned lifeless wolf spiders into “necrobotic” grippers. Yes, you read that right – and, no, you’re not the only one with a sudden phantom itch.

How did we get here? Well, I’m glad you asked. Let’s start with an anatomy lesson. Unlike human beings, spiders don’t have antagonistic muscle pairs to move their limbs. Instead, they rely on blood pressure and flexor muscles that allow their legs to curl inward. A chamber in their head contracts to send blood outward, and that hydraulic pressure allows a spider to extend their legs. It’s for that reason that arachnids curl up when they die. Their heart stops beating, and they lose the ability to pressurize their bodies.

Incidentally, the sight of a dead spider inspired the team from Rice University to start exploring the possibility of using one as a gripper, and they’ve been working on the project since 2019. “This area of soft robotics is a lot of fun because we get to use previously untapped types of actuation and materials,” said Assistant Professor of Engineering Daniel Preston. “The spider falls into this line of inquiry. It’s something that hasn’t been used before but has a lot of potential.”

Once Professor Preston’s team understood how spiders move their legs, turning them into robots that could lift more than their own body weight was straightforward. The procedure involved tapping a needle into the arachnid’s prosoma chamber and securing it with a dab of superglue. A handheld syringe or lab equipment attached to the other end allowed the researchers to deliver a small amount of air to the cavity, which in turn would cause the dead spider to extend their legs instantly. The resulting mechanism was suitable for about 1,000 open and close cycles.

According to Preston, potential use cases include microelectronics assembly and insect capture. As TechCrunch points out, it’s hard to imagine anyone selling necrobotic wolf spiders at scale. But if nothing else comes out of the project, you at least know how spiders move their limbs. The next time you see a dead one, you can tell a friend or family member this fun fact. I know I will.

Meta Raises the Prices of Its Quest VR Headsets by $100