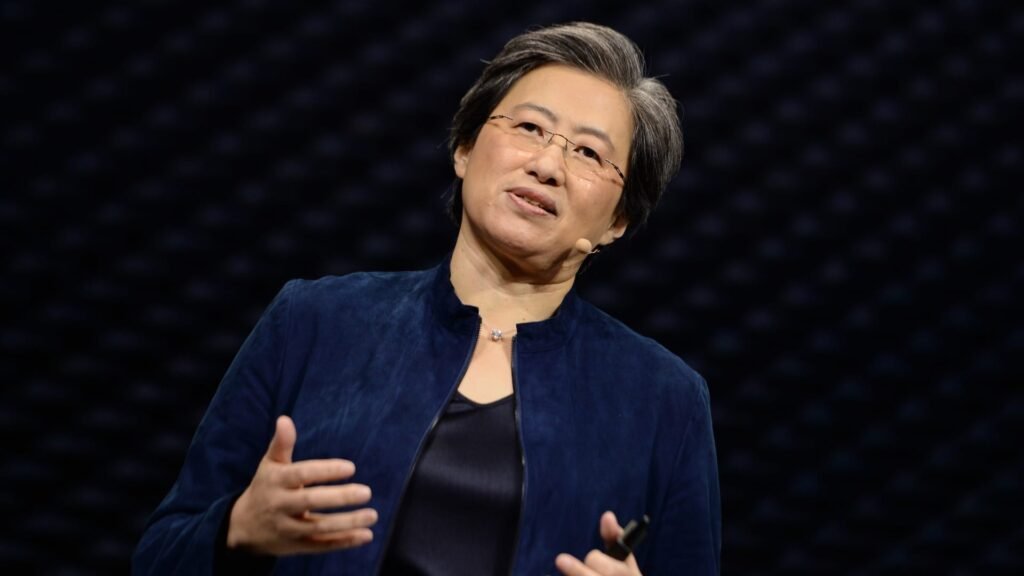 Advanced Micro Devices shares rose as much as 6% in extended trading on Tuesday after the chipmaker indicated that it’s looking for the server chip business to grow in the quarters ahead, even as earnings and quarterly guidance failed to meet Wall Street’s expectations.

Here’s how the company did:

Overall, AMD’s revenue grew by 29% year over year in the fiscal third quarter, which ended Sept. 24, according to a statement. Net income fell 93% to $66 million, mainly because of AMD’s $49 billion acquisition in February of Xilinx, a maker of chips called field-programmable gate arrays.

On Oct. 6, AMD issued preliminary results for the fiscal third quarter that lagged guidance it provided in August, given fewer chip shipments because of a weaker PC market than expected. The stock fell almost 14% in its largest decline in a single trading session since March 2020.

With respect to guidance, AMD said it sees $23.50 billion in full-year revenue, down from the $26.3 billion forecast the company gave in August. Analysts polled by Refinitiv had expected $23.88 billion. The company contracted its adjusted gross margin outlook to 52% from 54% in August.

AMD said its Data Center segment generated $1.61 billion in revenue in the fiscal third quarter, up 45% and slightly below the StreetAccount consensus of $1.64 billion. The unit includes contributions from Xilinx and distributed computing startup Pensando, which cost AMD $1.9 billion in an acquisition completed in May.

The chipmaker has seen healthy demand for shipments of its server chips that carry the code name Genoa. AMD plans to launch Epyc data center chips on Nov. 10.

“We’ve had very good progress at the North American cloud vendors and we continue to believe that although there may be some near-term, let’s call it optimization, of, let’s call it individual footprints and efficiencies at individual cloud vendors, over the medium term,” AMD CEO Lisa Su said on a conference call with analysts. “As we go into 2023, we expect growth in that market, particularly customers moving more workloads to AMD, just given the strength of our product portfolio and overall general coming forward.

The data center business “at least for now, looks decent, and quite a bit better than what’s going on with Intel,” said Stacy Rasgon, senior semiconductor analyst at Bernstein, in an interview on CNBC’s “Closing Bell: Overtime” after AMD announced its results. “There’s a lot of uncertainty about what they were going to say about data center, particularly in the wake of Intel’s report where Intel had called for the market to decline in Q4. This is probably why the stock is up now. The guide itself is quite weak, but it seems likely that it’s isolated to PCs.”

The Gaming segment produced $1.63 billion in revenue. That was up about 14% and in line with the $1.63 billion consensus among analysts surveyed by StreetAccount. The company touted healthy demand for console chips as the holidays approach for Microsoft and Sony.

The Embedded segment that includes some Xilinx sales delivered $1.30 billion, up from $79 million in the year-ago quarter and in line with the $1.30 billion StreetAccount consensus.

AMD’s Client unit, which the chipmaker had warned about in October, came up with $1.02 billion in revenue. That was down nearly 40% but in excess of the $1.17 billion StreetAccount consensus. Four days after AMD gave preliminary results, technology industry researcher Gartner said third-quarter PC shipments fell 19.5%, the steepest decline the company has seen since it started following the market in the mid-1990s. During the quarter AMD announced Ryzen 7000 desktop PC chips, and AMD pointed to positive reviews of the products.

All four of the segments delivered slightly more revenue than AMD had said to expect in its October warning.

“We will continue to invest in our strategic priorities around the data center, embedded and commercial markets, while tightening expenses across the rest of the business,” Su said. The company will control operating expenses and headcount growth, said Devinder Kumar, AMD’s finance chief.

Notwithstanding the after-hours fluctuation, AMD stock has slipped 58% so far this year, while the S&P 500 index is down 19% over the same period.

This is breaking news. Please check back for updates.